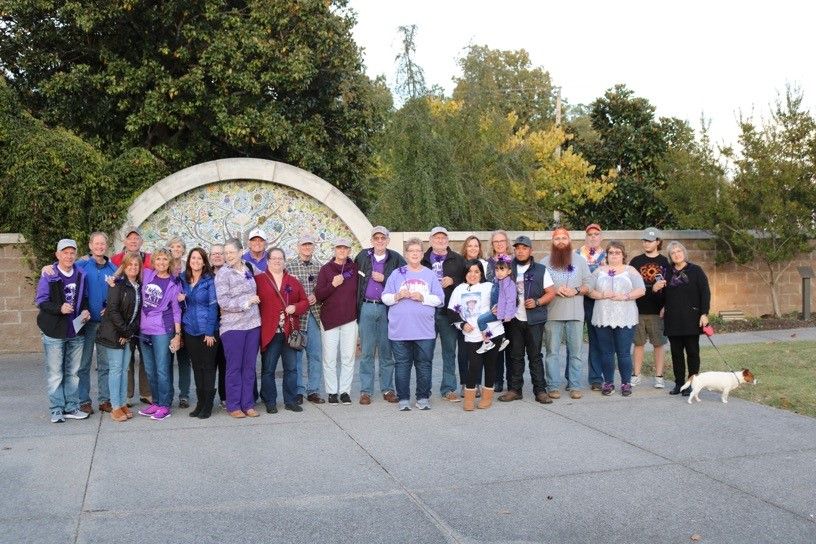 Memphis, Tenn., November 19, 2018 – The Kosten Foundation’s Tribute at Twilight event on November 3 paid tribute to those lost to and affected by pancreatic cancer. Approximately 25 people gathered in Cancer Survivors Park, despite the cold windy weather, to share personal memorials to loved ones and support for those who are currently fighting the deadly disease. The event included a symbolic purple pinwheel display, a reading of the names of those who had passed away, and a glow stick ceremony. 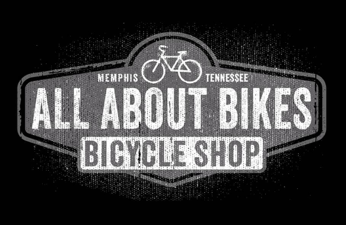 Buy a bike in November and All About Bikes will donate $20 to fight Pancreatic Cancer.

Memphis, Tenn., October 24, 2018 – Memphis-based nonprofit Kosten Foundation for Pancreatic Cancer Research and Support and All About Bikes invite the community to join in the fight against the third most deadly cancer during Pancreatic Cancer Awareness Month this November. For every bike purchased at All About Bikes on 621 S. Mendenhall Road in Memphis, Tennessee, $20 will be donated to the Kosten Foundation.

“We are incredibly thankful to Tommy James and the team at All About Bikes for supporting us during Pancreatic Cancer Awareness Month by donating $20 of each new bike purchased in November to the Kosten Foundation,” says Alan Kosten, Chairman of the Herb Kosten Pancreatic Cancer Charitable Fund. “We remain steadfast in our commitment to finding a cure for this terrible disease and we encourage you to participate and join us during our many initiatives coming up this month as we fight together as a community.” 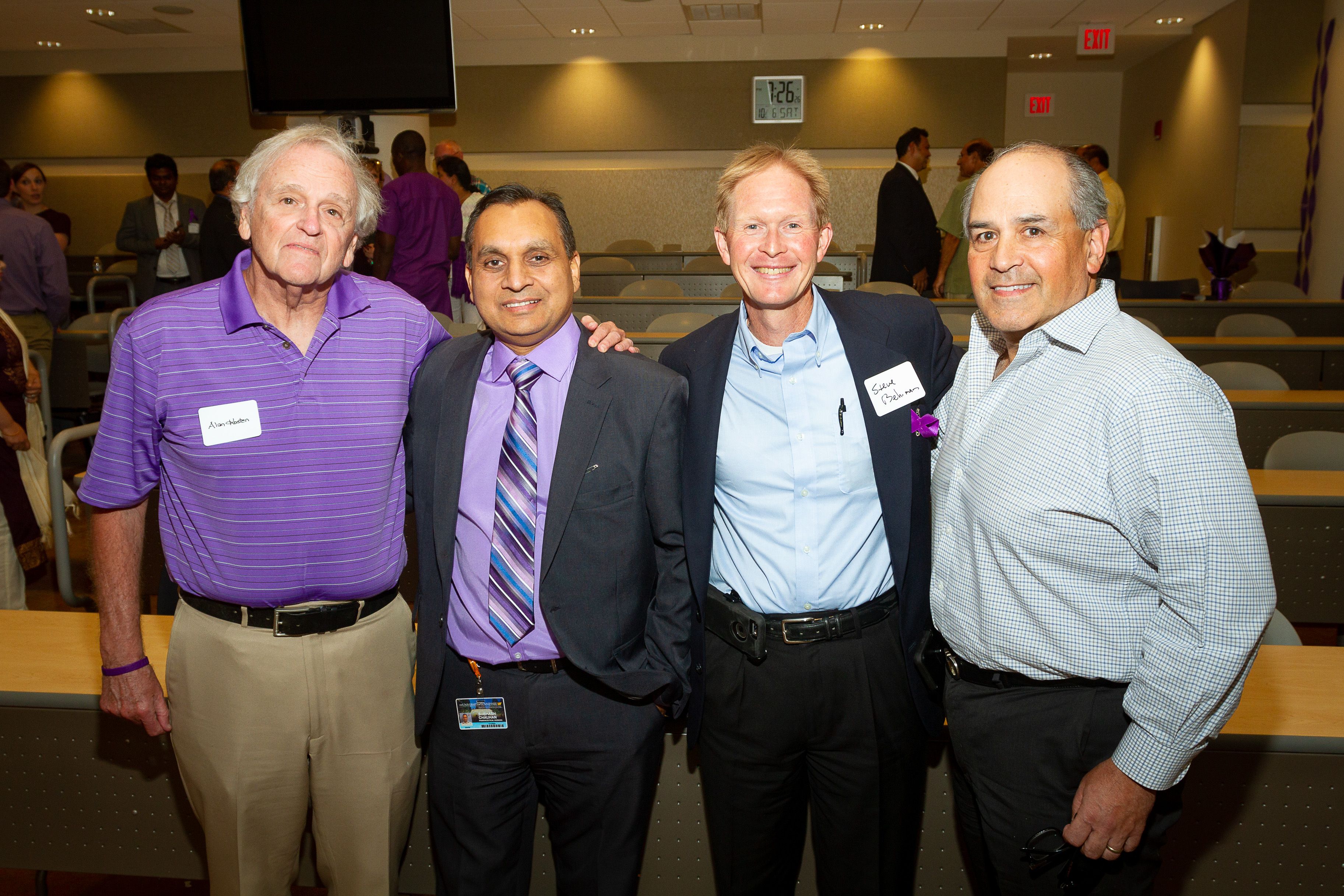 Over 150 attendees learned firsthand about the work the Memphis-based Pancreatic Cancer Research Team is performing to try to cure the deadly disease.

Memphis, Tenn., October 18, 2018 – More than 150 people turned out to learn about pancreatic cancer at The Kosten Foundation’s Fourth Annual Purple Night, held October 6, 2018, at the University of Tennessee Health Science Center (UTHSC.) The event is designed to bring together researchers, physicians, patients, and their families and showcases work underway at UTHSC to find biomarkers for pancreatic cancer, establish new treatments, and train the next generation of researchers who will unlock the secrets of the disease. The evening is open to the public and includes recognition of survivors, a memorial to those who have died from the disease in the past year, and a meal of Indian food prepared by India Palace Restaurant and served by the research team, making it a celebration of life.

“Purple Night gives individuals the opportunity to meet the Pancreatic Cancer Research Team, learn what they are working on, and hear about advancements they have made to help fight this deadly disease,” said Alan Kosten, chairman of the Herb Kosten Pancreatic Cancer Charitable Fund. “The Kosten Foundation exists to support events such as these, as well as to help fund research to find a cure for pancreatic cancer, and provide resources and support to those battling the disease.” 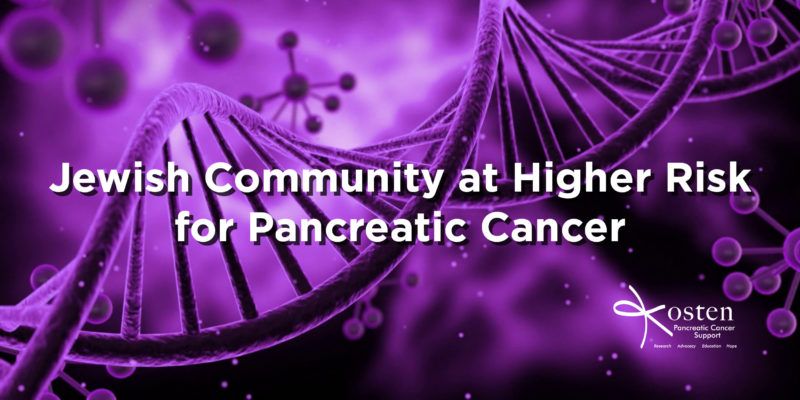 Research has shown that people who carry mutations in the BRCA1 and BRCA2 genes (typically associated with breast and ovarian cancer) have a higher risk of several types of cancer, including the rare and deadly pancreatic cancer. While the proportion of specific harmful BRCA1 and BRCA2 mutations varies among individual racial and ethnic groups, people of Ashkenazi Jewish descent have been proven to have a higher prevalence of mutations in both genes. According to the National Cancer Institute, 1 in 40 Ashkenazi Jews, both men and women carry a BRCA gene mutation — more than ten times the rate of the general population, significantly increasing their risk of developing pancreatic cancer.

“I had no idea about the increased risk for pancreatic cancer for members of the Jewish community,” says Alan Kosten, Chairman of the Herb Kosten Pancreatic Cancer Charitable Fund and an active member of the Jewish community of faith Memphis, Tennessee. “The Kosten family and the Kosten Foundation have been advocating for greater awareness of pancreatic cancer ever since my brother, Herb, passed away from the disease in 2003. This news is something that really hits home for us and has made us take an even closer look at this disease, not just for ourselves, but for the many members of the Jewish community here in the Mid-South and other areas.” 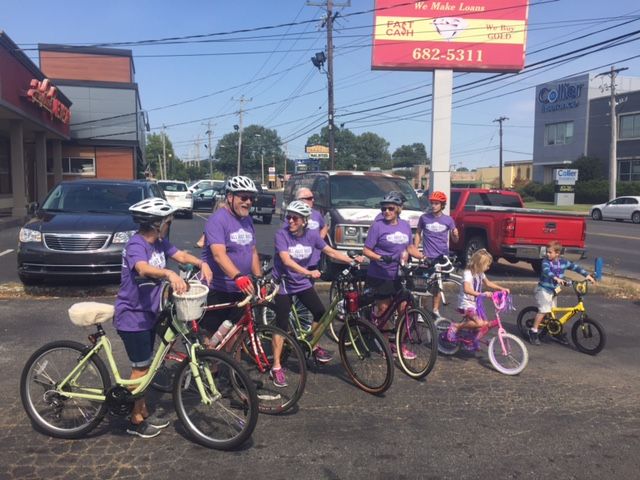 “We all know someone who has had some form of cancer,” says Tommy James, “My dad passed away on October 1, 2015, from this awful disease. He was my best friend and my hero and this event is my way of paying tribute to his memory. I hope everyone will come out to help us support this cause and help continue the legacy of the greatest man I’ve ever met, my dad.” 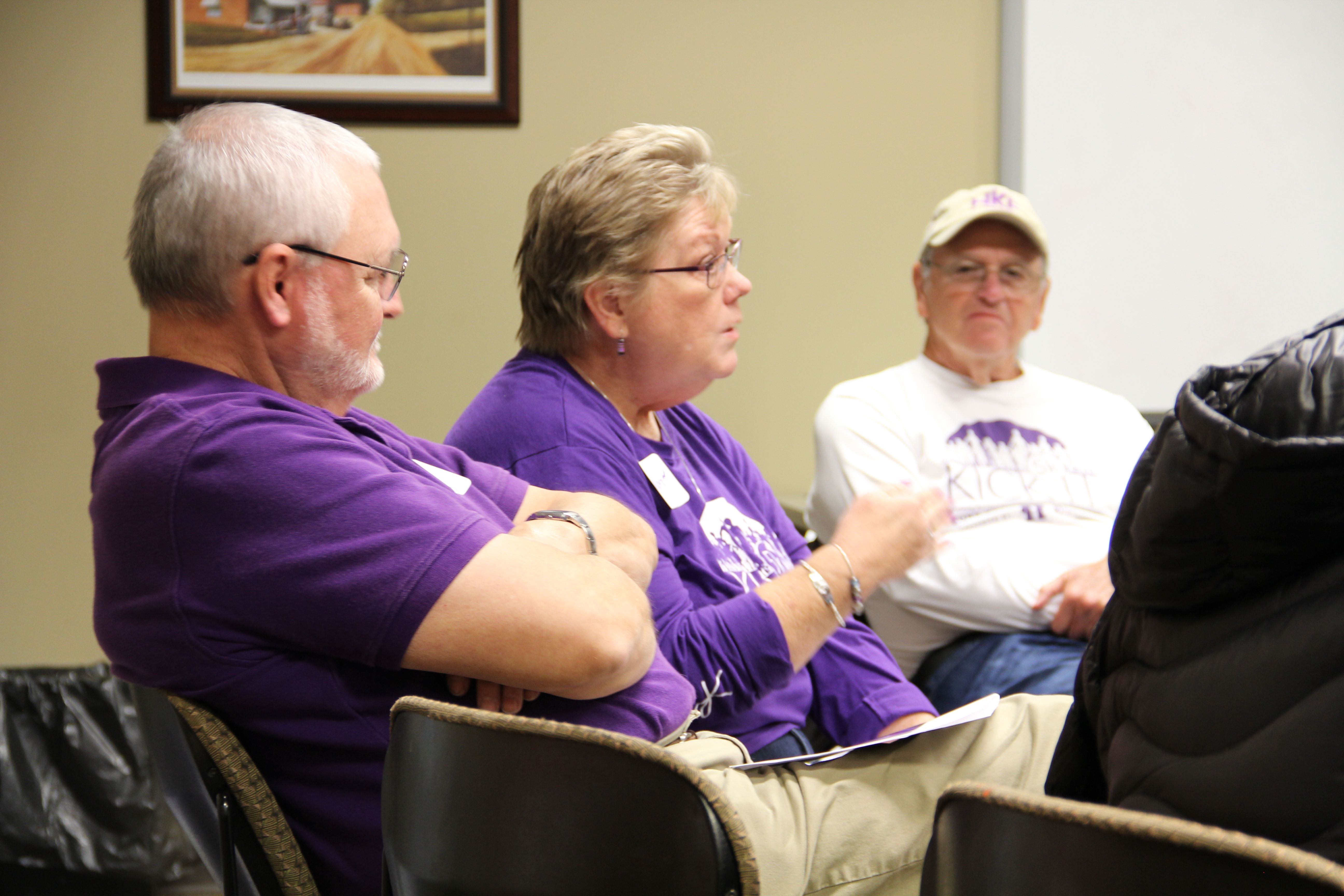 The Healing Effect of a Support Group

Your doctor has diagnosed you with cancer. Your head is swimming with thoughts about treatment, loved ones, setting priorities, finances, and more. If you’re like many cancer patients, you’re likely also feeling isolated because, even though you are surrounded by family and friends, you’re overwhelmed by the feeling that no one understands what you’re going through.

Many cancer patients find that participating in a support group with others who face a similar diagnosis or have gone through similar experiences can provide healing to their emotional and spiritual well-being, which is just as important as good medical care.

“Listening to those brave souls in the support group give their testimonies about pancreatic cancer and what they’ve gone through literally changed my life,” said Larry Frantz, pancreatic cancer patient and member of the Memphis-based Kosten Foundation Support Group for Pancreatic Cancer. “I had given up hope and decided I was going to die when I learned about the Kosten support group. We started going and I realized it’s so much more than just a group talking about death and dying. It’s for the patients as well as their caregivers. It helps everyone. I am so thankful to the Kosten Foundation for starting this support group to provide help for patients who previously had nowhere to turn.”

While the format of every support group is different, the benefits are usually similar. What benefits can you expect to find in a support group? We’ve outlined a few of the most common that participants have shared: 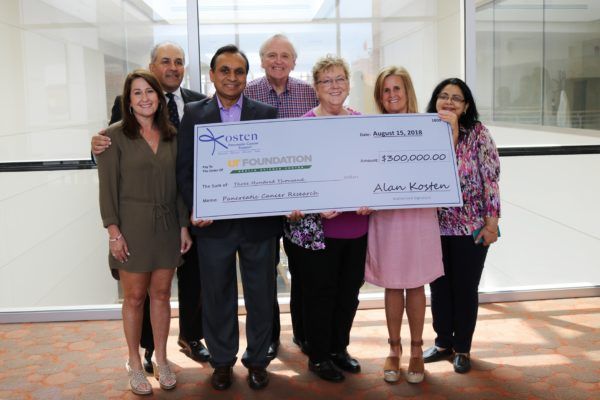 Memphis, Tenn., August 17, 2018 – The Kosten Foundation for pancreatic cancer support recently announced a $300,000 grant to the University of Tennessee Health Science Center’s Pancreatic Cancer Research Team in support of continued research efforts toward finding a cure for pancreatic cancer, the third most deadly form of cancer and the disease that claimed the Kosten Foundation’s namesake, Herb Kosten.

“Pancreatic cancer is one of the deadliest diseases and there is currently no cure. Our lab is working towards finding a cure and improving the ability for early detection for pancreatic cancer,” said Subhash Chauhan, UTHSC Professor of Pharmaceutical Sciences. “This generous donation from the Kosten Foundation will help us bring the best and brightest research students to Memphis and provide them state-of-the-art equipment on which to conduct this important research.” 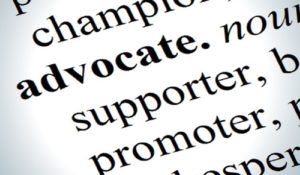 Being an Effective Advocate

What is an Advocate?

An advocate is someone who stands up for a person, group, or cause. They may make phones calls or write letters on someone’s behalf, speak in front of a court or agency, or lobby or campaign for an individual or a group. Anyone can be an advocate. From attorneys or social workers to a nonprofit group or a concerned citizen, advocates can be anyone who is committed to championing a cause. No matter the capacity in which an advocate works, however, he or she must have some key characteristics to be effective.

Being passionate about a cause can be an advocate’s most useful trait. Energy and enthusiasm will come through when an advocate is making their case. Also, that passion will help them overcome any obstacles that they may encounter. Decision-makers and organizational leaders recognize passion in advocates and often listen closely when an argument is presented forcefully with compassion and care. 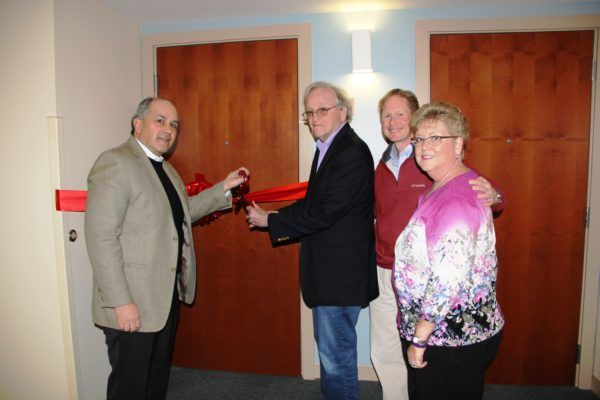 Cancer Patients that are visiting from out of town to receive cancer treatments will be able to focus more on their battle against cancer and worry less about their housing as local nonprofit, The Kosten Foundation for Pancreatic Cancer Support announced a donation of $15,000 to the American Cancer Society Harrah’s Hope Lodge in Memphis, Tennessee to fund a dedicated guest suite. The suite will be used, free of charge, by any cancer patient and/or their caregivers who travel to Memphis to receive treatment.

“We are very pleased to contribute to Harrah’s Hope Lodge Memphis, an organization that brings great value to adult cancer patients and their families from various cities across the country by providing free temporary lodging in Memphis as they undergo treatment,” said Alan Kosten, Chairman of the Kosten Foundation. “We have met many out of town patients at our free, monthly support group meetings, so we are humbled that we can help out of town patients and their families better focus on their treatments as Harrah’s Hope Lodge Memphis provides a free place to stay.” 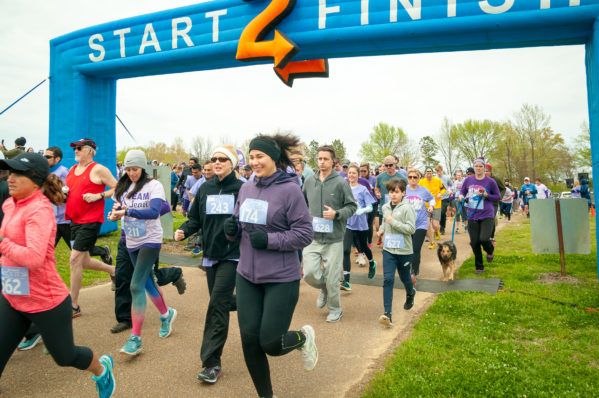 With over 1,500 participants, the Kick It 5K Reports Great Success in the Fight to End Pancreatic Center

Cold weather did not deter over 1,500 runners, walkers, volunteers, pancreatic cancer survivors, and supporters as they raised more than $150,000 at the Kosten Foundation’s Eighth Annual Kick It 5K at Shelby Farms Park Conservancy on Sunday, April 8, 2018.

“The 2018 Kosten Foundation Kick It 5K was a tremendous success, “said Alan Kosten, Chairman of the Herb Kosten Pancreatic Cancer Charitable Fund.  “We raised over $150,000 with donations still coming in and saw over 1,500 people in the park supporting this wonderful event and cause. We are so thankful to everyone that donated their time, talents, and funds and to those that came out to run, walk, volunteer, and support our fight against pancreatic cancer.”

Kosten Foundation
“The thought of pancreatic cancer does not frighten me” – Alex Trebek
We're channeling our inner jeopardy host this #MotivationMonday as we continue the fight against pancreatic cancer. #WageHope

Kosten Foundation
Pancreatic Cancer patients can have trouble finding desserts for their diets, but this National Brownie Day enjoy a black bean brownie that will satisfy your sweet tooth and leave you feeling great!

Blog | Taste the Cancer-Fighting Power of Black Bean Brownies - NFCR
Today I’d like share with you a very special dessert that is made without sugar and without refined carbohydrates.
nfcr.org
View on Facebook

Kosten Foundation
Whether you're a patient, survivor, or loved one join our support group in sharing our stories about pancreatic cancer.

Kosten Foundation
"I just try to focus on now. . . and the things that I love to do. I’m not going to let cancer stop me from doing those things.” Survivor Dawnie Campbell shares her battle against pancreatic cancer. #SurvivorSpotlight

Pancreatic Cancer Patient Shares Her Journey
57,000 will be diagnosed with pancreatic cancer in 2019
spectrumnews1.com
View on Facebook

Kosten Foundation
This #ThankfulThursday we're grateful for All About Bikes! Owner Tommy James donated $20 for every bike sold in November. #WageHope